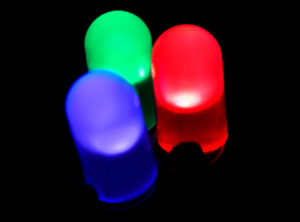 History of LED bulbs. Light emitting diodes (LEDs) are wonderful discoveries of the modern electronics world. In 1962 An American engineer -Nick Holonyak, invented the first LED light bulb while working for General Electric. Thereafter over the period of time LEDs are being developed to use in varies appliances.

Background: H.J. Round discovered electroluminescence in 1907 when using silicon carbide and a cat’s whisker. In 1961 – James R. Biard and Gary Pittman were working at Texas Instruments and they developed the Infrared LED. This was the first modern LED. It was accidentally discovered. James R. Biard and Gary Pittman together discovered and developed the infrared LED. But it was not visible.

History of LED bulbs – How were visible LEDs discovered and developed?

In 1962, Nick Holonyack, an American, consulting engineer for General Electric Company, invented the first visible LED. He used gallium arsenide phosphide as a substrate for his diode. For his contribution to the electronic technology, Holonyack is called the “Father of the light emitting diode”. It was a LED light. At General Electric Company it is called “the magic one.”

In 1972 – an American engineer M. George Craford creates the first yellow LED at Monsanto using GaAsP. He also develops a brighter red LED. In the same year, violet LED was developed by Herbert Maruska and Jacques Pankove in the USA. The substance they used is Mg-doped GaN films. Later on, the blue LED was developed on the foundation of this violet LED.

Initially, LEDs were very expensive, cost around US$200. Then it was used only as indicators in high professional laboratory types of equipment. In 1970, by using innovative methods of packaging and a planar process of chip production, the LEDs cost was reduced and thus made LED into a commercial product with the variety of uses.

How an LED Works?

Basically, a LED is a two-lead semiconductor light. These are P-N junction diodes which emit light when they are activated. With a right voltage, electrons are able to recombine with electron holes, releasing energy in the form of photons.

The function of LEDs is based on the effect of electroluminescence, that certain materials emit light when electricity is applied. LEDs have no like conventional lights having filaments that need to be heated up. LEDs are illuminated by the movement of electrons in a semiconductor material. The light emits from the p-n junction of the diode.

The very Basic stricture of LEDs is a just tiny light bulb that fit easily into an electrical circuit. But unlike an ordinary electric bulb, this doesn’t have a filament that will burn out, and it doesn’t get especially hot. These are illuminated by the movement of electrons in a semiconductor material, and they last just as long as a standard transistor.

LEDs are having different job functions and are found in almost all kinds of devices these days like televisions, light for illuminating houses, Glow sine, Traffic signals, clock, remote controls, etc. They are also used for transmitting information from remote controls. The LEDs tell you when your appliances are turned on.

We are a company that sells LED bulbs and we thought we try and answer the Question of How LEDs... read more