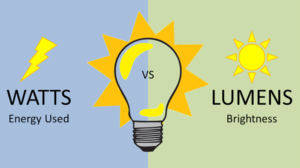 What is the difference between – Lumens and Watts

We are here to discuss Lumens and Watts.We often speak to customers who are surprised by how few watts our LED lights are, they often assume that because they are low wattage units, that they must not be bright. This is a common misconception, and it is based on a misunderstanding of what watts measure. Watts are a measure of the power used, not the amount of light produced.

Lumens are measured as the total amount of visible lights from a light source. So obviously higher the lumen rating means the light is brighter.

The brightness of a bulb is measured in lumens. Lumens is the output, it is the measure of brightness. More lumens mean more brightness. Check the lumens /watt ratio on the bulb’s packaging to choose the most energy-efficient light bulb. The greater the lumens-to-watts ratio, the more energy efficiency the bulb is.

Lumens, actually measure the amount of light being put out by the bulb. Lumens are an accurate measurement of lights because it tells you how the light actually performs. We need to choose lights in terms of Lumens (brightness), Not Watts(power consumed).

Knowing right ratings of Lumens will let you buy the right desired light you want. So when we will buy new light next time we need to think lumens, not watts.

The lumen( brightness) ratings, of our household lights, vary widely. Here is some guideline.

We need to understand the difference between Lumens and Watts ratings. Lumens is the unit of brightness and watts represent power consumed. Watts do not represent the brightness but the measure of energy use, not light output. in the present generation of LED technology, we need to choose lights according to the lumen, not watts.

We are a company that sells LED bulbs and we thought we try and answer the Question of How LEDs... read more